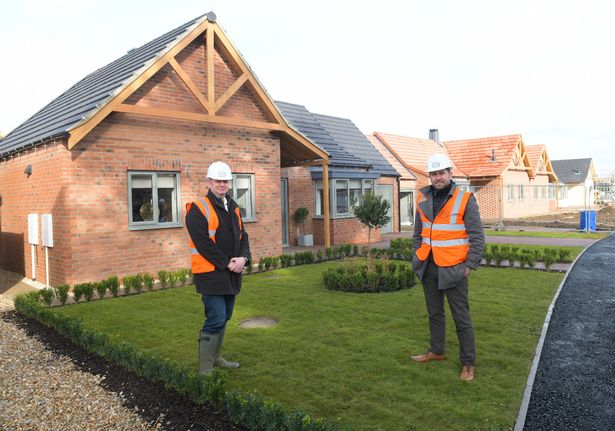 The first homes in a £45 million residential development are hitting the market as a ‘next generation’ neighbourhood arrives in Grimsby.

Phase one features 78 properties on former hospital land off Scartho Park, with a second phase convenience retail element and another 19 homes to come, then an over-55 apartment complex to follow. Assisted living proposals are also being worked up.

Kevin Stevens, president and founder of the Warwickshire-headquartered business, said: “We’re delighted to be able to reveal the first homes at King’s Park and explain to house buyers our fresh approach to creating this new sustainable community for Grimsby.

“Our emphasis is on providing thoughtfully designed and high-quality homes that are affordable as well as supporting the local economy by using local businesses such as architects, builders and estate agents to deliver our schemes.”

Mr Stevens said: “On a lot of new developments people sell the lifestyle, and that’s important, but kerb appeal is something really special and we have that.”

A first weekend of marketing saw two reservations, with five more in the offing as the build continues.

Next summer’s eyed for first phase completion, but E5 could be developing over a five year period.

“I was asked locally what I was hoping to achieve with King’s Park and I simply hope that in 10 years people are asking at local estate agents whether they have anything on sale there as it’s somewhere people really want to live,” Mr Stevens added, having more recently been developing luxury villas in Spain.

“I hope the show home represents and encapsulates this ideal and that we are providing homes that are superior to other new build offerings in the marketplace.”

Four retail units have planning consent, and with 3,000 people working at the hospital and a further 850 homes on Scartho Park, it is hoped the footfall will drive interest there – albeit stalled by Covid. “A cafe, bakery and convenience store would really suit, and further the village feel,” he said, believing it would complement the Aldi “weekly shop” on the neighbouring development.

“We need to be further on with the build for that,” he said. “The easy bit is the over 55 apartments, we have outline consent but need to start designing. Once we get more reserved we’ll be spending the money on the architect.”

A pilot of the supported living plan is also emerging in Dudley, with a model that fits local authority housing budget levels.

“If that works we can do that here,” Mr Stevens added. “We are engaging with the local authority, and they have been very good to us. I have nothing but praise for North East Lincolnshire Council.”

Named after Lincolnshire villages, there are 11 home designs, with three wall finishes and terracotta or charcoal roofs. Roads take royal monikers with William and Harry now adorning the site neighbouring the hospital that takes their mother’s name, having been renamed following her death after she had opened it.

Gary Croft, owner of his eponymous Cleethorpes-based agency, said: “It is a first real step into commercial scale housing and they wanted to team up with local companies, and that’s why they teamed up with JemBuild, Hodson and ourselves, with as much local material used as possible too. They are for local people and by local people, and of a very high specification, from kitchen to under-floor heating. It is certainly a step up.”