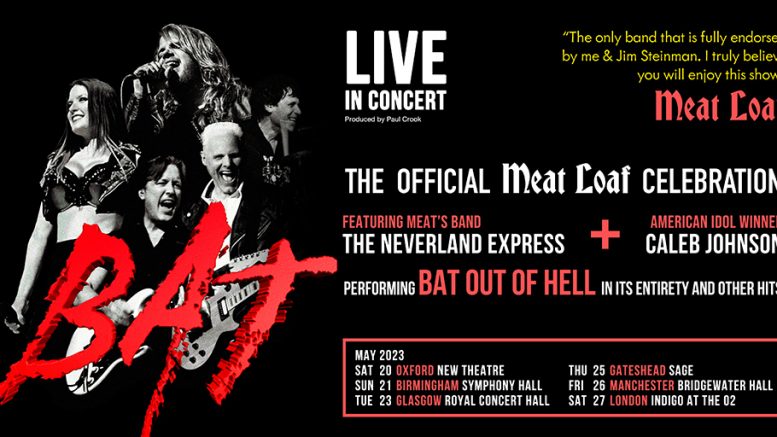 Bat – The Official Meat Loaf Celebration featuring The Neverland Express plus American Idol winner, Caleb Johnson, have announced live dates for 2023. The tour starts on Sat 20th May at Oxford’s New Theatre and culminates in London at Indigo at The O2 on Sat 27th May.

The show celebrates the legendary Meat Loaf and includes his hit songs performed brilliantly by world-class alumni of his official band. Performing the iconic “BAT OUT OF HELL” album in its entirety, the show also includes hits from “Bat Out of Hell II”, “Bat Out of Hell III”, “Dead Ringer” and even “Rocky Horror Picture Show”. Led by Meat Loaf’s longtime record producer/music director/guitarist Paul Crook alongside John Miceli (drums), Randy Flowers (guitar) and Lyssa Lynne (female lead/backing vocals), the band stays true to the original recordings while delivering the excitement of a live Meat Loaf show.

In addition to a #1 album and touring with some of the biggest names in rock, Caleb delivers his own unique stamp to such classics as “Bat Out of Hell”, “Paradise by the Dashboard Light” and “I Would Do Anything For Love” while staying true to the essence of Meat Loaf’s delivery.

Created & produced by Paul Crook, this is the only band that was officially endorsed by Meat Loaf.

“To be perfectly honest, it’s going to be emotional as it’s our first time overseas without Meat Loaf. I know I can speak for the band in saying we have always considered our UK fanbase as family, a second home. They are loud, fun, passionate and, together with them, we are going to make this tour the ultimate celebration of our beloved Boss. Meat Loaf loved touring the UK and to say that he appreciated his fans would be an understatement. Very much like Meat Loaf, Caleb is a charming, true southern gentleman with a huge voice. This will be his very first time in the UK. We believe that our fanbase is going to welcome him into the “family” the second he steps on stage”. PAUL CROOK

“I’m super excited and honored to be celebrating this legendary and iconic music. My life forever changed after hearing the blockbuster album “Bat Out of Hell” for the first time when I was 15 years old. Meat Loaf is a massive hero of mine and I’m looking forward to rocking with the UK family!” CALEB JOHNSON: American Idol Winner

The dates are as follows: 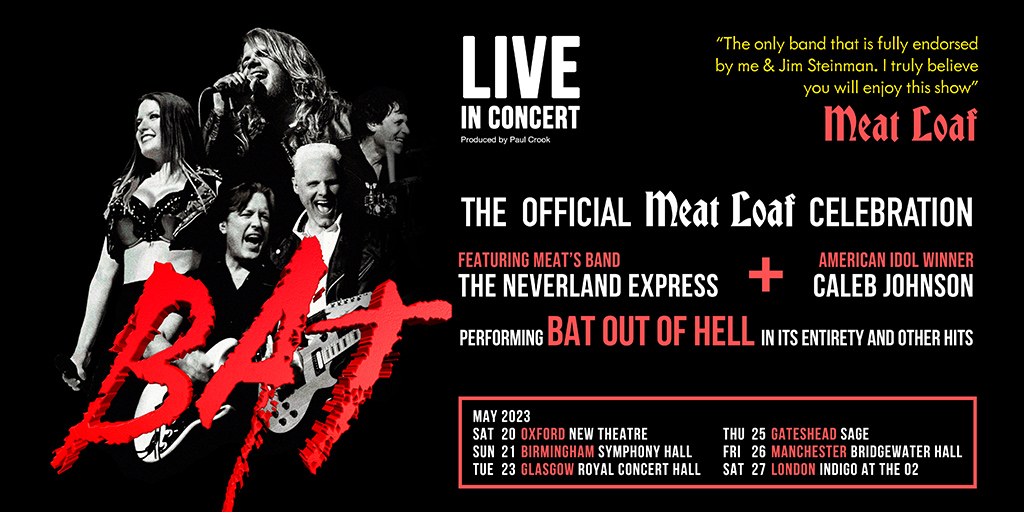