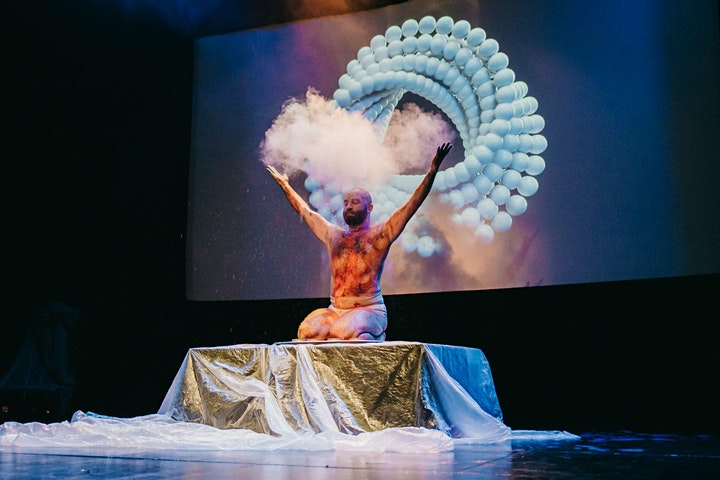 Ilk عِلْق, investigates queerness from a queer Arab perspective, tracking the roots of queer lives lived in Arabic and Muslim

Ahmad BaBa, a social artist and performer, is setting the ground for investigating identities on the level of bodies. The 10-day residency, as part of SHOUT festival’s programme for LGBT History Month in collaboration with Midlands Arts Centre, will combine the dual disciplines that Ahmad is engaged in: performing arts and dance therapy. His work focuses on claiming more visibility for underrepresented communities such as the LGBT+ refugee community in Berlin, and creating dance/storytelling projects.

Ilk عِلْق will set out a queer Arab Muslim futuristic vision, that starts with healing through rewriting histories on one’s own terms and (re)building an identity that has been much misinterpreted and distorted.

Inspired by the name of the book “A Promenade of the Hearts” – this performance will be a promenade of questioning what we knew, and what we know, and what is still to come.

As a term, Queerness does not exist in Arabic. However, it does and did exist as a practice, one that goes back further than the “queerness” that Western hegemony imposed on the globe. The language of queerness becomes hegemonic through erasing identities that existed before it and subsuming/substituting vast and complex communities, histories, and languages across the globe with a monolithic, generalising Western model of understanding and approaching sexual and gender diversity. So why are we expected to identify with a “queerness” that we had no power in creating? How can we speak the language of queerness when our own languages, terms, expressions are trapped within and abbreviated into an international queer (English) language? How are we pressured into partaking in the norms of acceptable “queerness”, what are the costs of not fitting into these norms, and how can we counter this regulatory and disciplinary function of queerness at our current historical moment?

‘Ilk is an attempt to engage with these questions! It is an investigation into how queerness has become a form of colonialism, erasing and homogenising many identities and ways of being that don’t necessarily fit under it as an umbrella term, but are nonetheless drawn to it due to the lack of taxonomies and terms that signify and encompass collective queer existences in their own contexts. Ilk is also a way of tracing the roots of queer practices that go back centuries in Arab and Muslim societies.

Ahmad BaBa is a Lebanese visual and performance artist based in Berlin. His work is rooted in critical interdisciplinarity and anti-oppressive practices. With a performing arts background and currently working towards his MA in Dance and Movement Therapy, Ahmad focuses on developing embodied arts and therapeutic processes. As conventional pedagogies around body work reproduce systemic oppression in institutions, he works against viewing the effect of oppression as political mediums and complexities that fall outside of the “norm”. Ahmad’s practice works to centralise lived experiences as the core element for collective transformations through approaches based on a “by us, for us” framework, the rewriting of bodies’ stories through dance, and redefining trauma-related oppression(s). Some of his previous projects and workshops include “Manuscripts of Foreign Body(s)”, “Deconstructing Aesthetics of Embodiment” and “QueeЯevolutions”. His visual performances approach identity from a critical and collective archivist perspective that revolve around understanding Queerness in relation to the multilayered Arab*Muslim identity(s). This has shown through in his work “Ilk علق“, which is an investigation into how queerness has become a form of colonialism, erasing and homogenising many identities and ways of being that do not necessarily fit under “Queer” as an umbrella term.

Mansur Ajang is a performer, director and coach working with marginalised communities in Berlin. One focus of his work is theatre productions with long-term unemployed people that unleash the potential of people in social and economic circumstances through artistic creativity. He was trained at the Elisabethbühne of the Schauspielhaus in Salzburg. First engagements followed at the Theatre of the Young World in Leipzig, Staatstheater Darmstadt and Ballhaus Ost Berlin. He is a member of the ensemble of the Magdeburg Theatre since 2022. Ilk is his second production with the performance artist Ahmad BaBa.

Oyoun is a hub for arts and culture centering decolonial, queer*feminist & class-critical perspectives in Berlin (Germany).

This international collaboration is made possible by Perform Europe. Perform Europe is an EU-funded project aiming to rethink how performing arts works are presented across borders in a more inclusive, sustainable and balanced way by testing new touring and distribution practices and providing policy recommendations for a future EU support scheme. This 18-month journey includes a research phase, launching a digital platform, testing a support scheme, and designing policy recommendations.