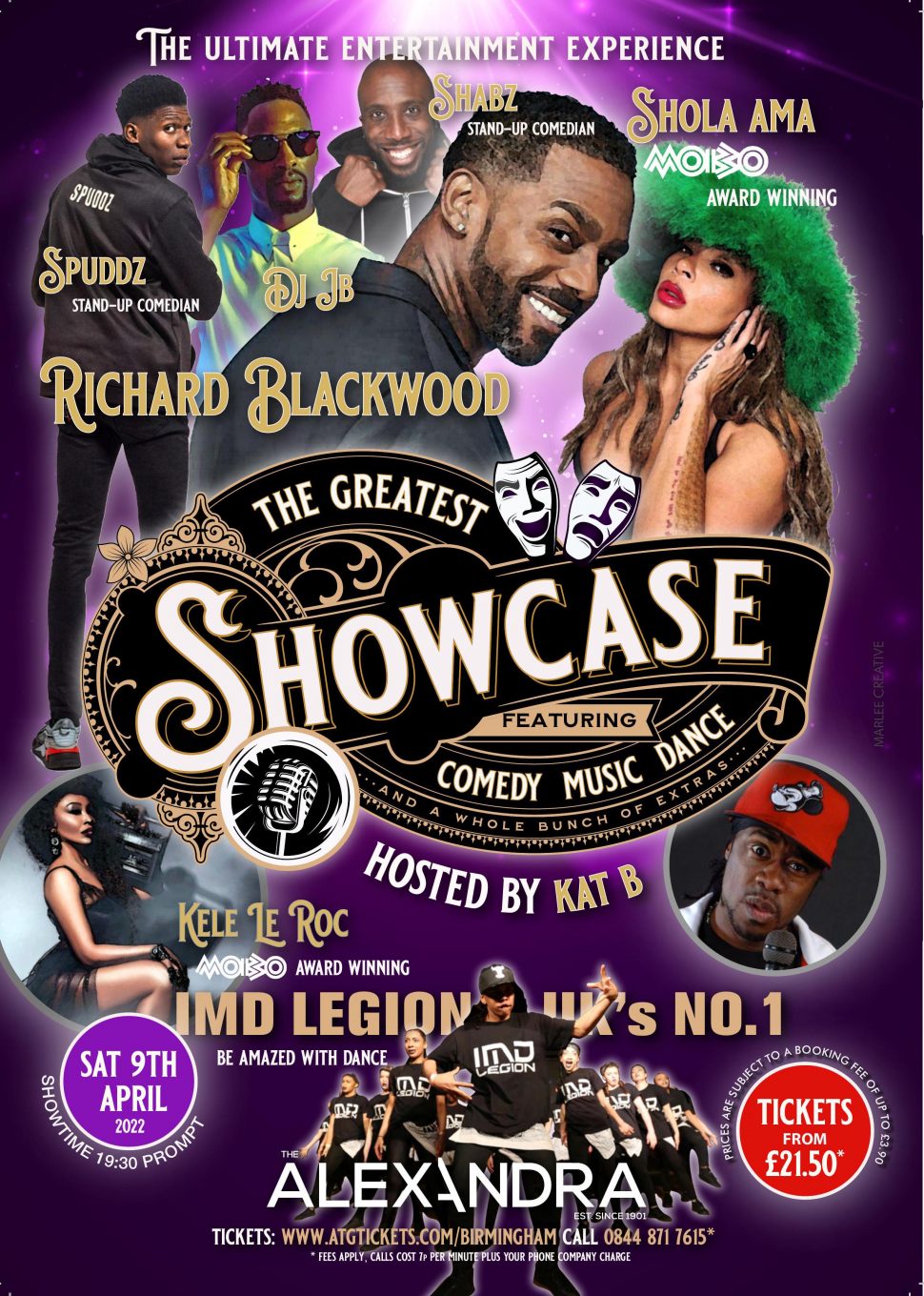 The ultimate entertainment experience, celebrating the very best in comedy, music and dance.  Over three hours of premium entertainment set within The Alexandra, one of Birmingham’s most iconic venues.  Hosted by all round entertainer Kat B who encapsulates all three genres of entertainment.  Starring three comedians including entertainment royalty Richard Blackwood, internet sensation Spuddz and one of the hardest hitting stand-up comedians of 2021/22 Shabz Kariem.  Also starring performances from award winning R&B and Garage artists Shola Ama and Kele Le Roc.  Plus rounded off with a dance performance from the Uk’s no1 dance troupe IMD Legion.  Three hours of laughter, good vibes and premium entertainment in a venue that will literally take your breath away.  This is a show you won’t want to miss.

Richard Blackwood:  Comedian/Actor Richard has been a leading name in urban entertainment since the 1990’s.  Most people will know Richard from his acting roles in Eastenders and Hollyoaks, however true fans will recognise him as one of the best stand-up comedians to come out of the UK.  He has charisma and charm to spare plus his comedy comes with guaranteed laughs.

Shola Ama:  British R&B and UK Garage singer whose biggest hits include ‘You’re the one I love’, ‘You might need somebody’ and garage classic ‘Imagine’.  Shola is a celebrated artist with accolades from both the ‘BRIT’s’ and ‘MOBO’s’.   Living legend known for her brilliant live performances.

Kat B:  Quick, quirky one of the very best all round entertainers in the UK.  Best known for his antics as presenter on MTV and for hosting various festivals and comedy shows up and down the country.  A guaranteed crowd pleaser.

Kele Le Roc:  British R&B and UK Garage singer whose biggest hits include R&B classic ‘Little Bit of Lovin’, and Garage classics ‘things we do’ and crowd favorite ‘My love (remix)’.  Double MOBO Award winning artist.   One of the trailblazers of the UK sound.

Shabz Kariem:  Formally known as ‘Shabba the Comedian’ Shabz is known for his energetic and hard hitting comedy that always delivers belly laughs.  Expect Shabz to flip from his funny stories from Jamaica accent to cheeky cockney chappie with breathtaking ease.  Known as the comedian that other comedians dont want to follow.

IMD Legion:  The Uk’s no1 dance act with TV credits that include ‘Got to Dance’, the ‘X-Factor’ plus ‘Britain’s Got Talent’.  Award winning dance crew ‘BDO World Champs’ and ‘UDO u18’s world Champs’.   Features on multiple music videos.  IMD Legion are the best dance act in the business!