A frustration at trying to play sport while having a mobile phone strapped to their arms prompted two former professional footballers to design their own alternative.

Now the pair have their eyes on new international markets as they take their ‘Freetrain’ vest to Australia, having already secured a foothold in the UK, US and across Europe.

The duo, aged 27 and 29 respectively, remained firm friends as their careers took them to clubs such as Nuneaton Town, Tamworth and Hednesford so in 2015 they started working on ideas for a new device which was wearable during exercise.

Their unisex product is a simple body vest worn over the shoulders which holds a mobile phone centrally on the chest and flips down to allow access, with additional space on the straps for storing small items.

They are hoping it will prove a popular alternative to the ‘unbalanced’ feel of having a phone strapped to the arm or wobbling about in a pocket for people playing sports and in particular runners.

Mr Wren, who now plays part-time for Walsall Wood, told BusinessLive: “We were training one day during pre-season, I was running with my phone in my hand and it was an absolute nightmare.

“So Jack and I came together and started brainstorming a few ideas which led to the development of the vest..

“We had one made that looked a little like a bulletproof vest but we thought it was too bulky and then took inspiration from the GPS tracker vests which a lot of footballers wear in training.

“We took that design and tailored it into something which balanced out the weight distribution of whatever you’re carrying.

“Originally, we thought it would solve the problem of carrying your phone on a run but, as we developed and refined it, it became something we felt could be used for any sport.”

To develop the product and apply for patents, the pair injected their own savings into the business and also raised funds by running football coaching sessions in local schools.

They are also qualified personal trainers so put on fitness sessions for both children and their teachers.

Mr Dyer’s grandmother knitted the first prototype which was cut out of a T-shirt and, after many months of fine-tuning the design, the first iteration of the vest was launched to market in autumn 2017.

Freetrain now employs four staff with the co-founders working alongside a partnership manager and customer service adviser, all operating remotely.

The vests, which should fit anyone aged 14 and upwards, are manufactured abroad and now sold in 12 countries, with Mr Wren estimating the UK accounts for 60 per cent of sales.

The company has online stores covering Germany, Canada and the US among others and it has just gone live in Australia.

He said there had been a spike in sales, both as a result of the coronavirus lockdown but also on the back of some celebrity customers being seen wearing the vests.

Mr Wren added: “From the minute Boris Johnson said all we could do was go walking, running or cycling, we saw an increase in sales.

“Professional footballers were going for runs and training on their own so the product spread like wildfire across the football community.

“But a really big turning point were the articles about the Coronation Street actor Colson Smith and his huge weight loss as there were photos of him in the press wearing our product.

“The moment that article came out, sales boomed again overnight.”

Looking ahead, the entrepreneurs, who both hail from the West Midlands, are now planning to expand their range which also includes waterproof gloves and a hat, with further concepts in the pipeline.

“We are really looking to fill gaps in the market so, where there’s a problem, we would like to come up with a solution,” Mr Wren concluded.

“It’s all about doing research and looking at where we can fill a gap.” 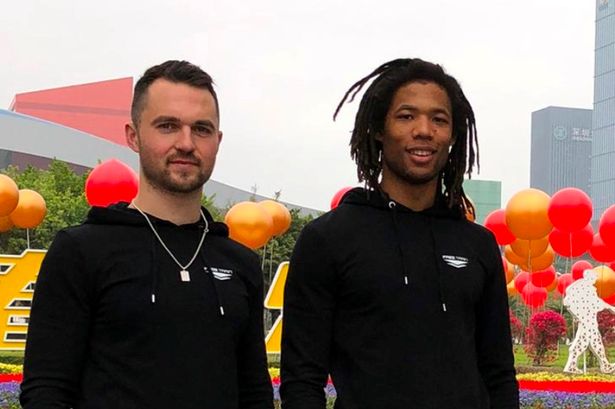