One of Birmingham’s most famous commercial buildings is to be clad in a giant artwork wrap as part of a major renovation project.

The Selfridges department store in Bullring shopping centre will undergo the work which is focused on improving its green credentials.

Its façade will be replaced and a new layer of insulation installed aimed at delivering a 50 per cent improvement in the rate of transfer of heat through the building, known as U-values, making the store more energy efficient.

The 15,000 silver disks which adorn its exterior will all be removed and the building will be re-painted in the original Yves Klein blue before the disks are reattached.

This will all take place behind the huge hoarding (see above and below) which has been created by Birmingham-born womenswear designer Osman Yousefzada in partnership with the city’s Ikon Gallery.

This is the designer’s first piece of public art which is called The Dogtooth Flower and has been inspired by a hand-drawn print from his own archive.

He launched his eponymous fashion label in 2008 and Selfridges in the Bullring was the first department store to sell his collections.

The work is due to begin in the autumn and be completed in time for the 2022 Commonwealth Games.

During the construction period some footpaths, bus stops and coach parking will be suspended but the store will continue trading throughout.

Selfridges at the Bullring has become a tourist destination in its own right and one of the region’s most photographed landmarks.

Its distinctive design was inspired by a 1960s Paco Rabanne chainmail dress.

Hammerson, which co-owns and manages Bullring, is carrying out the work.

Portfolio director Conrad Baconfor said: “We are proud the Selfridges building has gained icon status for its design and we want to ensure it maintains its pride of place both in Birmingham and the UK.

“The design and construction of the building means we have made the decision to undertake these upgrade works now to ensure the building’s long-term future while improving its environmental performance.”

Mr Yousefzada added: “I feel very lucky to have been selected from a shortlist of acclaimed international artists asked to design the scaffolding wrap.

“As an artist and designer, whose clothes have been stocked at Selfridges since my first ever collection, it is amazing to think I will be dressing Selfridges itself.

“This will be my first piece of public art and to be able to do it on such a scale is truly exciting. I can’t wait to see it completed.” 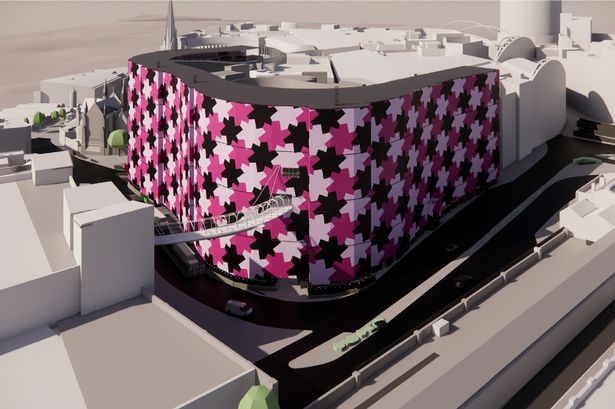 Former police station to be transformed in £2.1m housing and leisure scheme